For whatever reason, my fellow traveling companions and I thought it would be fun if we adopted British accents for the duration of the weekend. I was at first a bit resistant because I don’t do accents well, but I finally said, “Hang it all!” and embraced my inner Brit. I have to say, it was a lot of fun. I think it made everything more enjoyable. Only problem is now I can’t stop talking like that. I catch myself slipping back into the accent when I’m talking to people at school, and I can just see their minds whirring, thinking “What is going on with Erin’s accent?” Oh well.

I have 3 pages of my 10-page paper written. That’s pretty good, since I’ve only put in about an hour and a half of actual work. I should be working on it right now, but I needed a break. Without further ado, here’s a rundown of my trip:

First, we stayed at this really posh hotel right in the middle of everything. It is called The Georgian Terrace, it has 18 floors, and it was lovely. So lovely, in fact, that our suite had a full-sized kitchen (complete with dishwasher) as well as a washer and dryer. I wish I had brought my laundry becuase I could have saved some money. Of course, we didn’t exactly have time to do laundry and weren’t even in our room long enough, so I suppose it worked out for the best. Anywho, after arriving late afternoon on Friday, we gawked over our accomodations and then prepared to go out to dinner. We went to this fun little place called Strip Steaks and Sushi (and I sure wasn’t thinking about how googling “The Strip” would bring up a host of different results, some of which were definitely not food-related), located in Atlantic Station, which is basically several blocks of shops and restaurants and a movie theater, and it’s really nice and clean.

After this we roamed around and shopped a little before returning around 11 or so. We then got locked out of our hotel room because I didn’t realize that putting my room key in with my credit cards would de-magnetize it. Oops. The problem was quickly resolved, fortunately, and now I know to put the room key in a separate place. Let that be a lesson to us all. We wanted to go up on the roof to look at the view, but they closed the stairs leading to the roof at sunset, for whatever reason.

The next morning came bright and early, as we had the Georgia Aquarium to visit. It is a good thing we went early because there were swarms of people every where. The aquarium is apparently the largest in the world, and the setup was really neat, but not all that conducive to effective crowd control. At the aquarium we saw really large sea turtles, sea lions and otters, a myriad of fish, and (this is my favorite) beluga whales! They are just the cutest creatures ever, and I think I particularly love them because their noses remind me of that of dolphins, except that belugas have shorter ones. They were just really majestic and lovely. I also had the chance to touch a sting ray, and it was surprisingly soft and smooth, if not a little slimey. Aside from the crowds, it was a really enjoyable experience.

After the aquarium we grabbed a bite to eat at the Cheesecake Factory, and I have never had such a yummy meal, excepting the last time I was at the Cheesecake Factory. I do believe it is my favorite restaurant ever because they not only have amazingly scrumptious desserts, but they also have amazingly scrumptious entrees. (I probably gained back the 5 pounds I’ve lost, but I won’t dwell on that.) We then went to the spa, where all four of us were scheduled for hour massages. There was one male masseuse, and as none of the other girls were particularly eager to have him be their masseuse, I said that I would even though I was secretly freaking out. He was extremely nice, though, and I do believe it was the best massage I have ever had. And really, after I quit wondering what he thought about all of my flabby skin, it was simply wonderful.

We were so relaxed after the massages that we decided to chill and see a movie. We saw American Dreamz, and it was hysterical. I haven’t laughed that much during a movie in a while. I want to see it again, it was that good. Hugh Grant did a great job as Simon Cowell. Two thumbs up!

After the movie, we were starving, so we made a Wendy’s run and then headed back to our hotel. We came back to our cleaned room, and I headed to the bathroom, where I saw something I’ve never seen before:

In case you’re wondering, that is in fact a penny in the toilet.  I have no idea how it got there, and I’m not sure I want to know. Very curious.

Sunday we slept in and then headed out to go do some shopping.  I want all of you to meet my new best friend: 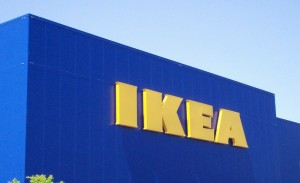 IKEA is surely the happiest place on earth. We only spent two hours there, but you really could spend the better part of a day there. It is just oh-so-much fun. I made several fun purchases for very little money. I do love a bargain!

Then we ate lunch at the California Pizza Kitchen, and I had the thai chicken pizza. Even though it sounds a little weird, it was awesome. After browsing the shops of Atlantic Station some more, we were on our way back to Knoxville and back to the reality of schoolwork. Sad. But even though I won’t be sleeping until sometime Thursday afternoon, it was all worth it.

If you made it through this entire post, congratulations! I’d give you a prize, but I’m broke now.