If you remember my post from last week, Charlotte caught a stomach bug. Tuesday night was the worst in terms of amount of times she vomited, but she also threw up on Wednesday a few times and was rather pitiful. She did not sleep well on Wednesday night, and neither did I. I felt as though I couldn’t get warm and never really felt comfortable. I also had an upset stomach of my own, although I never threw up.

Thursday morning I woke up feeling pretty queasy, and I thought, “Oh no, please oh please don’t let me get sick!” But sure enough, I felt worse and worse as the day progressed. Charlotte seemed to be doing better, however, although she only wanted to sleep snuggled up to me, which I happily allowed her to do since she doesn’t sit still much these days. Stephen came home around 1:45 to take his lunch break, and it wasn’t a moment too soon. I felt as though all the energy had been slowly draining from my body all day long, so the minute he got home, I went to bed and slept until he had to go back to work at 4:15 (he obviously took an extended lunch break, haha). Charlotte had done well the whole day, so we were hopeful she’d be able to go to daycare. I continued to feel poorly and ended up going to sleep at 8:30.

Around 11:00 or 11:15 I awoke to the sounds of Charlotte crying screaming. Stephen got up to check on her, and after realizing that her screams had not quieted down after a few minutes, I pulled myself out of bed to see if I needed to help Stephen. He met me at the bedroom door and then promptly sat down on the floor, telling me he felt like he was going to pass out and that Charlotte had thrown up in her crib. I rushed to her and saw her covered in throw up and screaming in misery. I quickly picked her up and went to the guest bathroom, where I started the bath and then set her on the counter so I could wipe off her face while the tub filled.

The last thing I remember is reaching to get a washcloth.

Next thing I know, Stephen was gently shaking me and calling my name over and over. I looked around and found myself on the floor of the bathroom. I was completely confused, having no idea what had happened. Then I looked behind me and saw the hole in our bathroom wall. 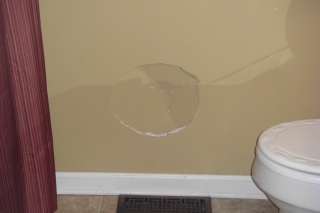 Immediately I said, “What happened? Did I do that?” I was in complete disbelief, but Stephen told me he’d been lying on the floor by our bedroom when he heard a loud thump. He came into the bathroom to find me unresponsive and slumped against the wall. Later he said initially he didn’t even realize that I had passed out but just though that I was resting for a minute, until I didn’t respond to him calling my name. Then as he was talking to me, he started looking really pale and said he felt faint. We’re both a little fuzzy on the details, but I think I told him to sit down. Meanwhile, at some point I realized that Charlotte remarkably ended up in the bathroom sink, when she could have easily crawled right off the edge of the bathroom counter! She had gotten over her initial displeasure and waved at me as I went to pick her up out of the sink and set her on the floor.

Then I realized that Stephen was being very still.

When I tried calling his name, I got no answer. I was freaking out at this point because his eyes were open but he was not responding, Charlotte was still covered in puke, and I still felt very lightheaded and had a throbbing headache. I had no idea what to do since it was approaching midnight at this point. Stephen eventually roused, but we were both practically incapacitated and just sat on the bathroom floor with Charlotte in between us, not knowing what we were going to do. I decided to call my parents, who live in Memphis (just an hour away from us). I’m sure I sounded barely comprehensible to them, but they told me to calm down and that they would be on their way as soon as they could but that I needed to call someone in Jackson in the meantime to come over and help. I called my wonderful friend and former college roommate, Marya, and she didn’t hesitate to come over.

I’m so thankful that Marya was able to come and help because I have no idea what Stephen and I would have done. Charlotte still needed a bath, and her crib sheet needed to be changed, but neither of us had the energy for anything. I sent Stephen to bed, where he ended up emptying the contents of his stomach, and after Marya and I determined that I was not bleeding anywhere, I sat in the recliner while she took the sheets off the crib, started a load of laundry, got Charlotte bathed and changed into fresh pjs, and held her. She stayed with me until my parents arrived at 1:30. They watched Charlotte and eventually soothed her back to sleep. I think I fell asleep somewhere around 3:30 or 4:00.

Thus concluded the worst night I remember experiencing. There is nothing so terrible as having a sick child and then being incapable of caring for her. I am beyond grateful to God for protecting Charlotte when I passed out, and I am forever indebted to Marya for coming over at such a late hour. And my sweet, fabulous parents ended up staying until Saturday so they could help us with Charlotte. They put themselves at risk of getting sick because they love us. Just when I thought my parents couldn’t be more awesome, they surprised me again. I am so blessed.

But I still have a hole in my bathroom wall.

7 thoughts on “The Story of the Hole”