Charlotte actually turned 7 months old on October 4, so I’m late in posting this. However, I did actually take the pictures on that day and just neglected to post them. 🙂 I cannot believe she is already 7 months old! Yes, I write a variation of that previous sentence every month when I do these updates, but seriously, it seems like I just wrote the 6 months post!  Charlotte is getting bigger and bigger and is at a really fun age.  Here’s what she’s up to these days:

1.  She’s almost crawling! She just this morning started doing a little army crawl with her arms, and it was super cute! She was also quite proud of herself and grinned and kicked her little legs on the floor. She already wants to grab everything within reach, so we are going to be in big trouble once she’s mobile. Case in point: I couldn’t even get a proper monthly picture this month because she kept knocking over the blocks the second I put them down. And when I put them out of reach, she just lunged for them and wouldn’t look at me at all. See? She’s holding the “7” block in this picture.

2.  She still loves to jumpjumpjump in her Jumperoo.

3.  She is getting much better about eating solid food and has tried carrots, butternut squash, sweet potatoes, peas, and bananas. We are taking it slow with each food, but I’m planning to introduce green beans and more fruits next week. Right now it appears that squash and peas are her favorites. She has no love for sweet potatoes and actually didn’t seem too thrilled with bananas, either.

4.  Her new favorite trick is to take two objects and bang them together. She will take a little block and a ball and just hit them together repeatedly, while sporting this very proud grin. She is quite impressed with herself. Here she is demonstrating this trick and further demolishing my nice, neat photo shoot:

5.  She’s gotten really good at scooting around on her belly and can get around well using this method. She also has started going from a seated to a crawling position and can pull herself up from a reclined to a fully upright position.

6. She loves to make this little low-pitched noise that I can only describe as a growl, and it cracks us up. She also loves to exercise her higher range by shrieking and screaming in painfully high-pitched tones. Sometimes she does this for fun and other times it’s because we’re being evil parents and trying to make her sleep.

7.  She routinely will sleep from 7 p.m.-7 a.m.  unless she’s ill or teething. Last weekend was AWFUL, as she had a cold and was working on another tooth, and she was up quite a bit at night and fussy during the days as well. I’m glad we’ve made it past that rough patch!

8.  She’s going to end up with three teeth on the bottom before she has any on top, from the looks of things. That should make for an interesting smile. If you look closely, you can see her two bigger teeth in the front: 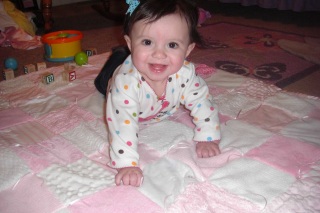 9.  She loves to be read to, but I think what she loves more than that is trying to tear the pages of whatever book I’m holding. Our poor Jesus Storybook Bible has already taken a few hits. (As an aside, I can’t recommend that children’s Bible enough! It’s fantastic!)

In this picture she’s saying, “What, Mom? I promise it was the dog that messed up the blocks. I’m innocent!”

“Hey, cool, she fixed them again so I get to mess them up!” 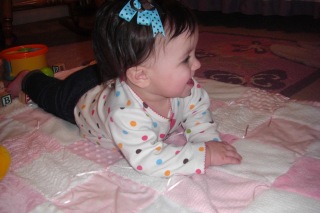 Sweet Charlotte, you’re a mess, but you’re an adorable mess, so we’ll keep you. 🙂

3 thoughts on “Charlotte at 7 Months”