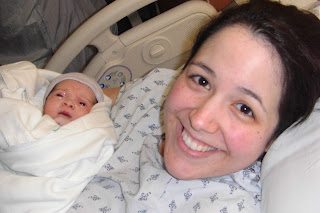 She weighed 6 pounds, 12 ounces, and is 19 inches long, and she is practically perfect in every way. 🙂  Here’s how she came into the world (caution: lengthy and detailed birth story ahead):

I woke up with contractions around 2:00 a.m. on Thursday morning, started timing them around 3:15, and by 8:00 a.m. that morning I decided we should go to the hospital because I just knew I was more dilated than I had been the day before at my doctor’s appointment.  Turns out I was only 3.5 cm at that point, so they had me walk around the labor and delivery floor for an hour to see if I would progress  any more.  However, when the nurse checked me again, she pronounced me at “not quite” 4 cm.  She said they could give me Pitocin to try and get things progressing more but since I wanted to try for a natural birth, the Pitocin would only make that more difficult, and I agreed, so home we went.  I was really disappointed and also felt very foolish for going and then not being far enough along to be admitted.  I prepared myself for the fact that I still had a few more days of pregnancy left and hoped the contractions would subside enough for me to be able to take a nap because I was exhausted.

However, the contractions did not subside but continued for the rest of the day, becoming more intense and more frequent.  I tried to sleep but was unable to sleep through the contractions.  I took two hot baths, walked laps around the backyard with Stephen, and tried my best to use the breathing techniques we’d been practicing. Finally around 6:30 or 7 p.m., I talked to my mom, and she said I should go back to the hospital.  I was nervous to go because I didn’t want to be sent home again, but I knew I couldn’t stay at home forever with the way things were going.  We drove back to the hospital, and while we waited in the lobby of admitting for someone from labor and delivery to take me up to that floor, I had four contractions.  I was beginning to feel very worn down and emotional and hoped that I had made enough progress to be admitted.  And when the nurse checked me, she said I was now at 5 cm (after having contractions ALL DAY–good grief!).  I asked if I was going to be admitted, and she laughed and said, “Oh yes, honey, we don’t let people leave at 5 cm.  You are going to have this baby!”  I called my mom back to tell them I was going to be admitted and that she and my dad should come, but she told me she was already almost to Jackson!  She had left after we had talked because she “couldn’t take it anymore” (her words).  I was hooked up to the external fetal monitor and ultrasound that measured my contractions.  At this point Stephen and I just were thinking, “We’re going to meet our baby tonight!”  It was exciting and overwhelming all at once.

Within the next two hours, I went from 5 to 6.5, then 7.5 cm a little while after that. It seemed like the contractions were coming every minute, even though I know they weren’t quite that close.  I remember saying more than once, “I can’t do this anymore,” and I would think for a minute that I was nuts for wanting to do this naturally, but somehow I kept going.  Philippians 4:13 (“I can do all things through Christ”) was ever in the back of my mind.  I spent a lot of time standing beside the bed, gripping the handrail because that made the contractions much more bearable than just lying in bed.  I also had really incredible, uncontrollable tremors in my legs and arms, and standing helped me feel more in control of those as well.  When I had a contraction, Stephen would come and put pressure on my back, and when I would start to moan and feel overcome by the pain, he would remind me to breathe, and I would, and it really did help. Stephen was such a great labor coach; I could not have stayed as calm and focused if he had not been there.

When the nurse came and checked me (I don’t know exactly when, but it was definitely after midnight) and said I was 9 cm, I was overjoyed because I knew that the end was in sight.  However, going from 9-10 cm seemed to take FOREVER, and I began to wonder if this baby was every coming out!  Finally, around 2:15 the nurse (who was absolutely fantastic through the whole process) said that it was time to push, and I was so relieved!  I would get to see Charlotte soon!

This sounds stupid in hindsight, but I had NO IDEA how hard pushing would be.  I had spent so much time thinking about how to get through the contractions that I didn’t fully appreciate how difficult pushing is.  I ended up having to push for about an hour and a half, and even though I felt like I pushed with all I had each time, Charlotte still wouldn’t come out.  Each time the nurse would say, “She’s so close, she’s almost here,” and then I would finish pushing and there’d be no baby.  I remember saying to her at one point, “You keep saying she’s almost here, so where is she?!”  I was closest to completely losing it when I was pushing, saying many times, “I can’t do this anymore,” but at that point I didn’t exactly have a choice.  I had to keep going.  My mom and Stephen were SUCH huge helps at this point because they supported my legs and kept encouraging me.  I am so thankful they were there with me.

Eventually the doctor came in, and then things sped up:  I ended up screaming at some point; the pushing seemed even harder; and then the doctor ended up having to use the suction to get Charlotte out because she was face up and wouldn’t turn.  The doctor used the suction several times while I pushed, and then finally, after being in labor for 25.5 hours, she was born at 3:40 a.m.!  I cannot describe how I felt at that moment.  I couldn’t believe it was over and that my daughter, for whom we’d been waiting and praying, was finally here.  I wasn’t able to hold her for twenty minutes because she passed a lot of meconium during labor and delivery, and the Special Care team had to come in and clean her up, but when I finally held her in my arms, everything else melted away but that sweet little face.

And now your reward for reading this entire post–a few more pictures: 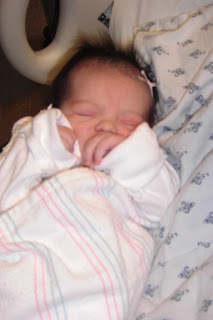 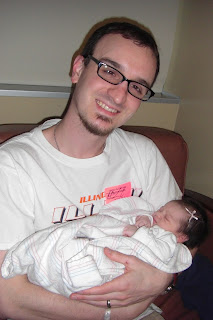 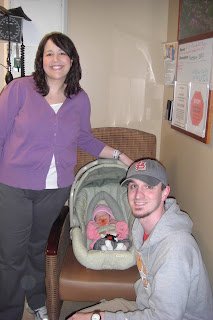 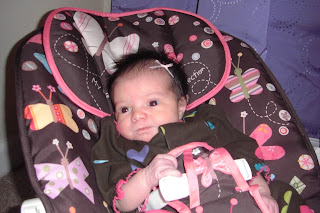 Call me biased, but she is one beautiful baby girl. 🙂

I will try and update when I can, but since Charlotte doesn’t like sleeping at night or unless she’s being held, we’re low on sleep right now (and if you have any tips for either of these dilemmas, please share).  I hope you all are doing well!