I don’t normally write weekend recaps because honestly, writing about the shows I watched on HGTV and Food Network and the workouts I did does not seem like the most exciting recap, but this weekend was different. Stephen and I decided to make an impromptu trip to southern Illinois to visit his parents, and so after he got off work, we left on Thursday around 6:30 p.m. We made it to his parents’ house by 11 p.m., and after visiting for a bit, went to bed. The next day we made a trip to the local recreation center, where Stephen and I swam, Stephen’s mom walked 3 miles (how awesome is she??), and Stephen’s dad read. I tried to stay moving the entire time we were in the pool, and I even did some pull-ups using the handles of the ladder that gets one in and out of the pool. After about an hour, we both felt like we’d gotten a good workout. This visit to the rec center in Illinois was much better than the last time when my knee was all messed up. I am so glad to have that pain behind me!

The best day was on Saturday. I got in a good 30 minutes of running and then we drove about an hour away to visit Stephen’s grandmother. We had lunch with her and his aunt and uncle and his uncle’s dad at Golden Corral. Yes, it’s a buffet, and yes I ate too much, but it was tasty (it’s a really good thing we don’t have one near us)! And I tried a new way of eating a cupcake that I’d seen on the show The Best Thing I Ever Ate on the Food Network. This one chef talked about how she liked to take off the bottoms of cupcakes and put them on the top, so the frosting is in the middle, like a sandwich. I tried this method, and I’m definitely a fan.

After lunch, we got to go out on a boat! Stephen’s aunt and uncle were kind enough to take us out on their boat, so we spent a several hours cruising around the lake. We took our dog Bailey with us, and while she had an accidental encounter in the water, overall I think she really enjoyed the experience, as did we. Witness the photographic proof: 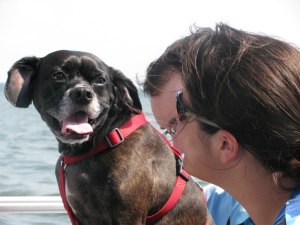 It was such a fun day! I’ve only been on a boat a few times in my life, and that was a long time ago, so I loved every minute we spent on the water. The day ended with a trip to Dairy Queen and some time relaxing at Stephen’s parents’ house.

Sunday we had to leave bright and early so Stephen could get back in time to work that afternoon. It was a quick trip, but a great one. I’m thankful to have married into such a welcoming family!

How was your weekend?